In the record-breaking summer temperatures of 1976, the Football League resumed on 21 August. Arsenal v Bristol City was one of the most intriguing fixtures on the opening day of the 1976-77 season, the Bristol club’s first game in the top division for 65 years, with manager Alan Dicks having built a successful side around locally-born players (five started this game, plus two more from the youth system). They visited Arsenal, who had newly recruited 34-year-old manager Terry Neill from Tottenham, and had their star signing, England’s feared striker Malcolm MacDonald (‘Supermac’), making his debut. Bought from Newcastle for the unusual fee of £333,333.34, MacDonald went on to be the First Division’s joint-top scorer that season. Like many professional footballers of his era, he appeared on the popular TV show Superstars, where he demonstrated his speed, running the 100 metres in an impressive 10.9 seconds. 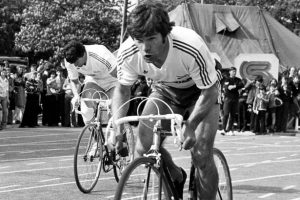 While a rebuilding Arsenal finished the season in 8th place, Bristol City were bottom of the First Division table at the beginning of May 1977 and seemingly destined for relegation. Their five remaining fixtures included Leeds United, Manchester United and Liverpool. With two games left, they were still at the foot of the table but managed to beat Champions Liverpool 2-1 at Ashton Gate and set up a dramatic final round of fixtures. After a delayed kick-off, Bristol City came from two goals down to secure a controversial 2-2 draw at Coventry. The result meant both sides stayed up at the expense of Sunderland, an outcome which still stokes resentment on Wearside.